Infiltrators of the Occupy Movement.

Popular activist movements attract all manner of scavengers and hangers-on, most of which seek to capitalize on the success of the more popular group to compensate for the fact that the majority of society regards them as a bunch of babbling kooks. The Occupy Movement is no different, with everyone from The American Spectator to Zeitgeist seeing the mass throng of people as easy pickings by which to enlarge their subscriber base and coffers. Some of these groups, however, see the Occupy Movement as a means to seek legitimacy for their own morally reprehensible causes, whether that takes the form of racism, fraud or selling out activists to the feds.

Here then, is a list of some of the most odious and dangerous groups and individuals currently sucking off the teat of the Occupy Movement. These people shouldn’t be considered part of the broader Occupy Movement, no matter what sort of “authority” they claim.

Aaron Barr? Again?! After sticking his dick in the hornets nest known as Anonymous, Barr faded from view– his career and home life in a shambles. Now he’s back, trying out his same old “I’m a security SOOPAR GEENIOUS” routine with defense contractor Sayres and Associates— presumably on some half-baked mission to “infiltrate” the Occupy movement. He’s also in the company of self-proclaimed Occupy Wall Street Snitch Thomas Ryan, who happens to be a blogger for the perpetually colicky Andrew Breitbart.

First came to prominence by hawking a bogus DDOS tool called #refref, which was promised to allow one solo user to take down any website. It was soon discovered that #refref was a total fraud, and AnonCMD was using this fake tool as a means to collect personal information on easily duped anons in order to “dox” them. He was run out of Anonops on a rail and has since turned up as the administrator for the Occupy Chicago Facebook group. During his time at the actual occupation in Chicago, he was heard to have been namedropping numerous prominent Anons as people he was allegedly friends with. This is classic snitch behavior– drop names of prominent activists as people you are “good friends with” in order to gain acceptance with higher-ups in another activist group, when in reality those “good friends” hate that snitch’s guts.

-Jaime Jo Corne and David Corne (AKA Presstorm and Vincubus)

We have gone over this shitstorm with a fine toothed comb, and so have other sites. Presstorm’s involvement boils down to the actions of a typical grifter couple– Jaime, who has already been sent to jail for fraud, set up Presstorm to milk gullible anons and anon-supporters out of cash that would somehow “support anonymous.” Whatever. They’ve been outed as frauds, a bunch of people were embarrassed and they’re now on the run from the inescapable, unholy wrath of Anonymous. They wanted your money, now they probably want the world to forget them.

UFO cult associated with something called The Venus Project, which is debunked in a very thorough manner here. The long and short of it is that they want your money.

Pseudo-hippie commune with a long history of former members with stories about various abuses and cult-like behavior perpetuated by Zendik leadership. They want all of your money. 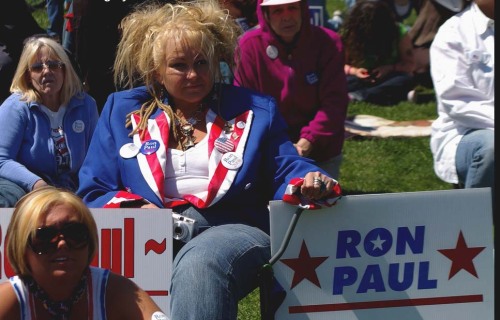 Personality cult built around a racist old coot. Why they’re involved with this is puzzling, because the overall thrust of the movement has been agitating for increased government oversight on Wall Street and banks and increased taxes on millionaires, which is something Ron Paul categorically opposes as being “un constitutional.” They want your money and your vote.

Patrick Howley at the National Air and Space Museum.

American neo-conservative magazine whose editor Patrick Howley bragged about infiltrating the Occupy DC movement and subsequently led a group of protestors at the National Air and Space Museum to storm the doors, which resulted in several people being pepper-sprayed. Howley was sprayed twice and praised his attackers in a peice that has since been removed from the American Spectator’s website, replaced and edited numerous times– but not before the mainstream press wrote about it.

Right wing militia group consisting of police officers and military personnel that– aside from REALLY HATING LEFTISTS– have attempted to be a large part of Occupy Los Angeles, going so far as to issue a really scary-sounding mission statement that does everything but state outright that they plan on staging a violent revolt against the US in general.

This part of their statement gets special notice: “Our government, over many generations has taken part in the destruction of the Constitution of the United States, the slow secretive theft of the rights from the American People, and during the un American acts, compromised the integrity of our nations great name. In light of these events, we now see ever so clearly that these leaders are no longer fit to represent the People of the Free World. We the People are now exercising our rights by way of the first two Amendments in order to Stand United for the Second American Revolution.”

The first two amendments? None of the Occupy groups has even remotely suggested any possibility of being even the slightest bit friendly to anything involving the second amendment, so this is what raises warning flags. This sort of vaguely-violent language comes directly out of the same scene that birthed the Alarm and Muster maniacs and the Sovereign Citizen movement. It’s dangerous and wholly at odds with the pacifist nature of the Occupy movement thus far; this just might be another American Spectator-esque stunt to discredit the movement as a whole.

We know these elements don’t hold any sway in the broader Occupy movement. We know that the mass media’s constant hammering of “the Occupy movement has no clear message” is bull– but it’s up to all of us to ensure that message doesn’t turn into “The occupy movement is just a bunch of paranoid, anti-Semitic UFO conspiracy theorists!”

36 responses to “Infiltrators of the Occupy Movement.”