Former Reagan Aide Wants to Split the Country and Reach Out to White Nationalists Because of Gays!

This has been the latest buzz in the blogsphere in the last 24 hours– a former Reagan aide, Douglas MacKinnon, has just released a book about how he wants to split up the country in an act of secession… because of gays, and he wants to name this new “gay-free” fantasyland “Reagan”.
Right Wing Watch wrote up a very good blog post, which includes MP3s of MacKinnon on the Janet Mefferd Radio Show.

Conservative columnist and former Reagan administration aide Douglas MacKinnon is out with a new book calling for Southern states to secede…again.

While speaking yesterday with Janet Mefferd about his book, “The Secessionist States of America: The Blueprint for Creating a Traditional Values Country…Now,” MacKinnon called for a movement of states, starting with South Carolina, Georgia and Florida, to establish a new country that will adhere to the Religious Right’s political agenda.

Texas, MacKinnon explained, was not included in his secessionist blueprint because “there have been a number of incursions into Texas and other places from some of the folks in Mexico.”

He added that the South had “seceded legally” and “peacefully” during the Civil War, but greedy Northerners like President Lincoln “waged an illegal war that was in fact not declared against the South after the South basically did what we’re talking about in this book now in terms of peacefully, legally and constitutionally leaving the union.”

Now, what Right Wing Watch might not know is that to get support for his mental derangement he has been reaching out to white nationalist groups like The League of the South.
The head of the LOS, Michael Hill brags on Facebook that Mackinnon has been calling him on the phone and sending him emails. 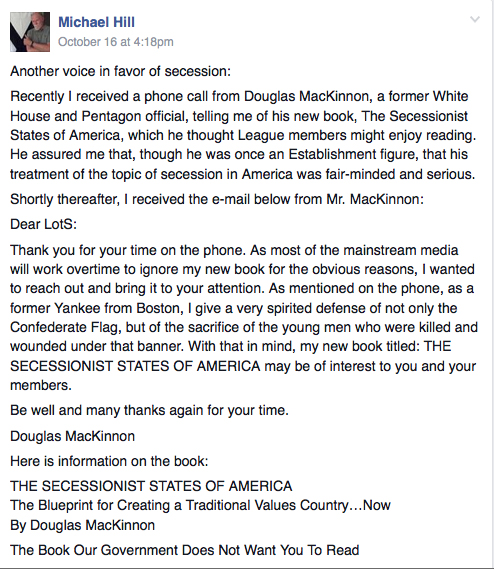 Comments Off on Former Reagan Aide Wants to Split the Country and Reach Out to White Nationalists Because of Gays!