Kyle Rogers of the Council of Conservative Citizens is now a Virginia Flagger Fan!

The Virginia Flaggers are a Confederate Heritage group, sometimes referred to as “Neo-Confederates”, who are based in Sandston, Virginia. The group was started in 2011,  their current leader is a woman named Susan Frise Hathaway who is constantly repeating their innocuous motto “Return the Flags – Restore the Honor.” Benign as the group may seem, it appears there is more to the group than meets the eye.

The Virginia Flaggers have had past associations with white supremacists during their activities as well known WN activist Matthew Heimbach was often seen in connection with the group. VA Flagger member Tripp Lewis had described Heimbach as a “good guy” even after Heimbach’s nefarious activities became more obvious.

In the early stages of the VA flagger group, Ms. Hathaway was also interviewed and promoted on a podcast with the white supremacist southern nationalist group League of the South.

It could be argued that their past associations to Heimbach and the League of the South are trivial and spotty at best, but now another white nationalist has stepped up to publicly praise and promote the VA Flaggers and their activities.

The Council of Conservative Citizens is listed as a White Nationalist hate group by the Southern Poverty Law Center and is a reincarnation of the White Citizens Councils. CofCC’s website and blog is administered by Kyle Rogers, a fairly well seasoned white nationalist activist who has been on the scene for a number of years now. Kyle very rarely makes a public appearance but when he does it certainly makes an impression (lol!)

Kyle, out of the blue, has decided that now the C of CC has a keen interest in the VA Flagger as he is now promoting their up coming “Lee-Jackson Day” event in January on the C of CC website called TopConservativeNews.com 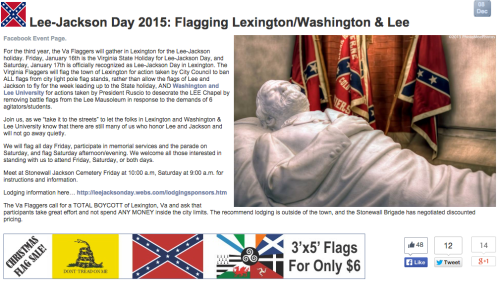 This promotional article is also plugged  on hate forum Stormfront by a user named “UlsterScot12,” believed to be the alias of Kyle Rogers.

Another posting was discovered on the White News Now forum under the category “Council of Conservative Citizens”.

Why would Kyle and the C of CC all of a sudden take an interest in a group that claims they are not racists or white nationalists– like the agenda of the C of CC and Kyle himself?

One plausible reason is centered around Kyle’s side business, which is an internet flag shop called “Patriot Flags.” There, Kyle takes freedom of speech down to the level of selling a variety of flags, many with a white nationalist or Nazi based theme. And if you take a second look at the C of CC Flagger article …

In the world of capitalism it would make sense that Kyle smells cash in the blood of these confederate flag worshippers. He has a strong connection to League of the South and makes a profit by being the providing source for their big black X flags, glee club polo shirts and most likely the printed signs for their meager protests.

Are the VA Flaggers perhaps a potential business prospect? Or maybe the business relationship has already been on going? Either way– flaggers need flags, Kyle sells flags and he sells the kinds of flags they are looking for and they already have mutual friends in the League of the South.

The event in question that the Virginia Flaggers are planning is on Friday, January 16, 2015 and Saturday, January 17, 2015, in Lexington, Virginia for the Lee-Jackson Holiday.

For the third year, the Va Flaggers will gather in Lexington for the Lee-Jackson holiday. Friday, January 16th is the Virginia State Holiday for Lee-Jackson Day, and Saturday, January 17th is officially recognized as Lee-Jackson Day in Lexington. The Virginia Flaggers will flag the town of Lexington for action taken by City Council to ban ALL flags from city light pole flag stands, rather than allow the flags of Lee and Jackson to fly for the week leading up to the State holiday, AND Washington and Lee University for actions taken by President Ruscio to desecrate the LEE Chapel by removing battle flags from the Lee Mausoleum in response to the demands of 6 agitators/students.
Join us, as we “take it to the streets” to let the folks in Lexington and Washington & Lee University know that there are still many of us who honor Lee and Jackson and will not go away quietly.
We will flag all day Friday, participate in memorial services and the parade on Saturday, and flag Saturday afternoon/evening. We welcome all those interested in standing with us to attend Friday, Saturday, or both days.
Meet at Stonewall Jackson Cemetery Friday at 10:00 a.m, Saturday at 9:00 a.m. for instructions and information.
Lodging information here… http://leejacksonday.webs.com/lodgingsponsors.htm

Yeah, well LOL, so much flag drama and so little time. The most humorous part of the picture is this Va Flagger call for a TOTAL BOYCOTT of Lexington, Va and ask that participants take great effort and not spend ANY MONEY inside the city limits. The recommend lodging is outside of the town, and the Stonewall Brigade has negotiated discounted pricing. This boycott has apparently been ongoing since 2011.

Has this boycott had any effect on the businesses of Lexington?

There has been considerable doubt expressed as to the effectiveness of the boycott. According to data contained in a post at the Civil War blog Dead Confederates, the boycott has thus far been wholly ineffective and has made no measurable difference on the economy of the city of Lexington. An informal poll conducted by telephone to no less than 20 local businesses in Lexington, between Friday, December 19, 2014, and Sunday, December 21, 2014, also show that the boycott has had no negative effect on the economy of the city of Lexington. One hotel manager in Lexington said that he “Had no idea what we were talking about”, while the manager of a well known chain restaurant in town commented that they, “Didn’t know there was a boycott”. We did not receive a single positive response from any of the merchants in Lexington, Virginia indicating that they had lost revenue due to the effects of the boycott, with most commenting that they had never even heard of the boycott prior to our inquiry.

Who is going to this event?

Well we have spotted at least four known League of the South members Dennis Durham, Shane Long, Josh Newcomb and Jamie Farren who have pledged to attend the event.

Note: We must stress that we have no grounds to assume that the Flaggers are directly responsible for the Council of Conservative Citizens’ promotion of this event or the League of the South members joining in on the event, so we’ll give them the benefit of the doubt– but it’s certainly suspicious that a group that has had nothing to do with the Flaggers is now bending over backwards to promote them.

It is unclear if the Virginia Flaggers will distance themselves from the Council of Conservative Citizens and the League of the South by simply denouncing the groups promoting them with the possible prospect of business profits or the League of the South who see this as a venue to recruit and hand out their steel magnolia fanzine.

Comments Off on Kyle Rogers of the Council of Conservative Citizens is now a Virginia Flagger Fan!