This Just In: International Meeting against fascism and racism, Athens, October 5-6, 2013 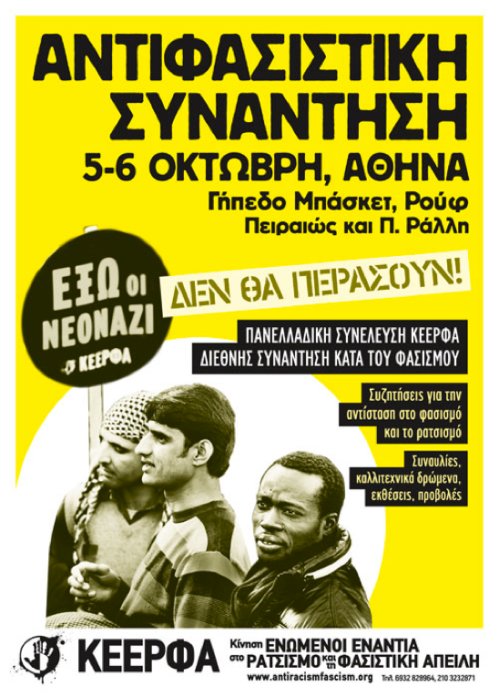 International Meeting against fascism and racism, Athens, October 5-6, 2013
Faced with the rising threat of neo-Nazism, a new resistance movement unfolds and struggles to stop it before it’s too late. On January 19, in Athens and in over 40 countries, thousands marched against fascism and racism, as a signal that the hope that struggles bring can defeat despair and fear.Increasingly, governments are playing the card of racism  blaming immigrants for their dead-end crisis and mass unemployment. They want to turn immigrants into scapegoats for their bankruptcy.

Neo-nazis are bred by racism, the policies that build concentration camps for FRONTEX and the closure of the borders fortress Europe. They are also bred by the intensity of “anti-crime” policing, which governments attribute it to immigration, instead of blaming the poverty and misery that their policies bring. The neo-Nazis attempt to attract angry voters in a period of severe political crisis and undermining of democratic rights.

It’s time to escalate, to strengthen and coordinate all over Europe and the world our common steps to resist the threat of fascism and racism.

There can be no tolerance for the attempt to legitimize the fascists using the national elections, the European Parliament and  the local elections as a means to whitewash their criminal activity in the streets and our neighbourhoods. We need to build  the struggle to defend the unity and workers’ rights regardless of religion, ethnicity, gender, skin colour, sexual orientation. We need to defend the richness of multicultural society. Let’s make our neighbourhoods and our cities bridges of friendship and solidarity, away from rationales of separation. We should not allow the neo-Nazis to form attack squads, to raid and wreak terror by burning mosques and synagogues, beating migrants, refugees and Roma, attacking homosexuals and targeting militants of the left.

We urge the unions, youth organizations, the anti-racist and anti-fascist organizations, immigrant communities, movements defending the rights of gays, women, Roma to join us in the fight for a Europe and a world without racism and fascism, to block the lies, ignorance, fear and prejudice that breed racism, Islamophobia, anti-Semitism and pave the way for the fascists.

Let’s unite against fascist organisations and  racism and islamophobia.

We invite you in Athens on 5-6 October to a first international meeting of antifascist and antiracist movements to coordinate our steps.

Our New Friends “Truth Wins Out”

TWO has an amazing wealth of information in debunking the phony “ex-gay” myths as well as exposing the hypocrisy of the right wing hell hounds who attack the gay community.

We give them the LLL thumbs up!!!

One DC: Community Block Party and Housing as a Human Right! 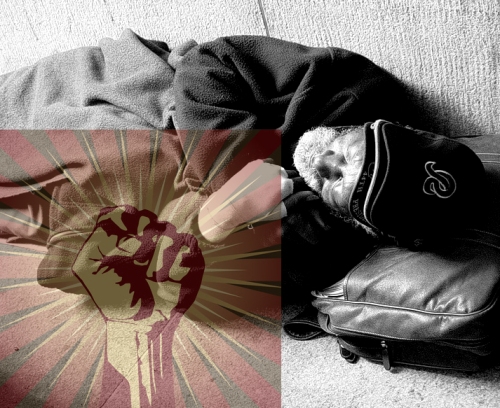 ONE DC cordially invites you to enjoy the festivities and support

ONE DC’s Community Block Party and Housing as a Human Right!

4pm-Press Conference about our Human Right to Housing!
5pm-onward…You have be there to see and participate!

Stand with ONE DC as we campaign for the Human Right to Housing/Equitable Land Development!

Home demonstrations have always been a way to protest for social justice by activists.
To the home owner who is the target of such demos, it can appear a bit daunting, but there has been very little to no records of violence in the DC area from home demonstrations.

Huntington Life Sciences is one of the most hideous animal abusers in the gruesome world of animal testing. Bordering on death camps and based in England, HLS has sparked many years and hundreds of thousands of protests against them from all over the globe.

Jennifer Luray, works as a senior executive for a new “non-profit” organization, funded by Abbott Labs, Battelle, GlaxoSmithKline, and the March of Dimes.
Jennifer Luray, until recently, headed up government relations for Abbott Labs, to take on the role of Vice President for the pharmaceutical lobbying front group for 3 of the largest customers of HLS and March of Dimes, who have been exposed for sloppy, unethical science and animal torture.

The animal rights group DARTT has a long list of groups, companies and individuals who are closely connected to HLS, and Jennifer Luray is on that list. Hence, Luray and her husband Steve Goodman had maybe annoying, but always peaceful demonstrations at their home.
Halloween 2008, during a home demo at the Luray/Goodman residence in a very wealthy section of DC, the protests went a bit sour, but not from the animal rights activists, but from Steve Goodman who went on a violent rage against a female protester

Since then, the well to do and politically well connected “Jennifer Luray” has been trying to throw her weight around by forcing a proposed bill to not allow this style of protest to continue in her privileged neighborhood.
The DC Direct Action News Reports HERE

HLS protest target accuses peaceful protesters of planning to burn home
At a Feb 13 fur protest, a participant told WSQT Radio that Steve Goodman, the husband of HLS customer exec Jennifer Luray, had accused peaceful protesters of plotting to burn their home at a DC City Council meeting on the subject of a proposed ban on home demos.
Since there has never been an Animal Liberation Front fire in the DC area, this ludicrous claim borders on slander. It is also stupid,as that sort of stuff didn’t start in California either until the authorities began suppressing peaceful protests with injunctions, raids, and arrests-sometimes for nothing more than giving out leaflets.

Steve Goodman, who once chased protesters into a Metro station and choked a woman protester, also had the nerve to call protesters “domestic terrorists,” “hoodlums,” and “thugs.” With his record of violence, this is an outrageous slander.

There is a great audio report and more HERE 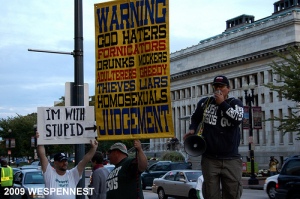 Granted, it wasn’t exactly a “perfect storm”, but it was a pretty good storm, well worth the price of admission if only for the satisfaction of seeing a gang of cops being faced down by some people picketing on a public sidewalk who actually had a frickin’ permit, f’cripesake. 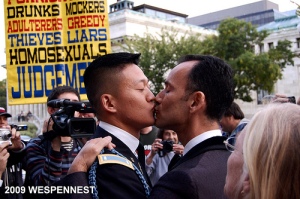 Sharing a kiss in front of bigoted homophobes

A diverse range of opinions were on hand outside the Convention Center Saturday evening on the occasion of the Human Rights (a.k.a. “Human Whites”) Campaign’s annual banquet, which this year featured as its headline speaker US President and Nobel Idol Winner Barack Obama, a leader with a record of zero campaign promises kept so far for gay/lesbian/bi/trans citizens.

“Operation Rescue” founder and domestic terrorist Randall Terry was there with the usual posse, but without the usual over-the-top street theater, only Randall himself giving us what can only be described as a rant that was “phoned in” compared to the God Hates Fags-type characters who taunted and insulted picketers with far more conviction and gusto further down the sidewalk from him.

The rest of Wespennest’s photo set can be seen here

*NEW LOCATION*: Protest will be located at Washington DC Convention Center @ the corner of 9th And Mt. Vernon Place.
Protest will begin at 6pm

Many of us watched in disgust this past January as the homophobic Reverend Rick Warren was given an honored place at the inaugural festivities. It was as if a leader of the White Citizens Council had been invited to the White House.

This homophobic behavior by the Obama White House has been repeated several times before and since:

** During the South Carolina primary, when his campaign featured rabidly anti-gay Gospel performer Donnie McClurkin at a major rally;

** With the quiet dropping of most pro-gay promises from the Obama website earlier this year – until a firestorm of protest forced them to return much of it;

** With the failure to rescind President Clinton’s ban on HIV+ people traveling to the United States, and his ban on granting green cards and citizenship to HIV+ immigrants;

** With the unnecessary administration brief in favor of the Defense of Marriage Act (DOMA), with language worthy of the most vicious anti-gay bigot, making a mockery of his promise to repeal DOMA;

** With the statements by Obama that his “Christian beliefs” make him oppose equal marriage rights, as if the former Constitutional law scholar from the University of Chicago doesn’t know anything about separation of church and state. Obama’s homophobic statements were of course gleefully quoted to great effect by pro-Prop 8 forces in California;

** With the failure to blunt “Don’t Ask Don’t Tell” (DADT) by issuing a stop-loss order. Instead, he authorized surrogates to endlessly delay the junking of DADT, thereby breaking his promise to repeal it;

** While an inclusive Employment Non-Discrimination Act has been reintroduced into Congress, President Obama has expended virtually no political capital in getting it or any other pro-gay measure passed.